Here's where all things related to Book III are being discussed!
Post Reply
8 posts • Page 1 of 1

Well. After being away from two years, it only felt right to play through the Eschalon series again with something I hadn't done before. I chose a Divination expert, though I found pick locks was critical without Lock Melt or Unarmed Combat. Honestly, this has been one of my favorite playthroughs - I find that specific playthroughs like this make the game much more challenging in some aspects and way too easy in others. For example, in Book II I got Mystic Hammer pretty early, and basically nothing could stop me from that point forward. On the flip side, without it in Book III (I got it like 45 minutes of playtime before finishing the game) I was basically helpless. Here are my highlights from this playthrough:

From Book I
Running all the way through Bordertown to Blackwater before getting a spell to damage enemies.
Casting Smite for the first time on a Taurax who got too close.
Using Mass Boil at the Goblin Citadel, leaving none alive.
Running around Gramuk in circles for 8 years because he was so immune to magic attacks.
Haste + Mass Boil + Mana Fortitude made the destroyer's ending very easy.

From Book II
Reading my own Walkthrough for info on the Bronze armor quest, only to find that it's wrong.
Accidentally going to Crius Vindica before talking to Minus or the library dude about the looking glass.
Zeblin getting critically injured and trying to flee.
Seeing Mystic Hammer for the first time in Hammerlorne (immediately after stealing the crux) and falling in love.
Renting a room in Durnore 21 nights in a row to sell all of my Hammerlorne loot ("Here, I found this in some old mine over there. Thought you might want it.")
Killing the golem for the first time without any tricks or gadgets - just raw magic power (5 mana per turn, plus a few potions).
Casually killing a taurax only to realize later it was Captain Rukka.
Sleeping for 45 minutes to restore 350 mana.
Carrying the iron dagger that I started the game with (Nefarious Healer gets Piercing weapons) all the way to Talushorn. And using it like 10 times total.

From Book III
Starting off the game with Fleshboil level 3, and getting it to level 6 before leaving Rockhammer - meaning there were no challenges until Mirkland.
Getting to 2 Mana regen per turn before getting to Moonrise.
Spending like a third of my playtime on Mirkland since I dealt half damage to everything.
Killing the final dimensional eye before anyone else could lay a finger on it.

Conclusion:
I love Divination now. Definitely in my top two (hard to decide between this and my unarmed expert) for favorite builds.
I need to redo my Book I and Book II walkthroughs. Undecided about Book III. But yeah, it'll probably get a makeover too.
I'm excited to be part of this community again, and I'm excited for the future of Basilisk Games!
Book III gets a lot of flack - I think the two biggest reasons that I've seen are its length and its ending. And sure, I would've liked a longer game too. But honestly, the Eschalon feeling is there all the way - I feel like I'm a part of the world, I feel invested in the characters there, and the music and dialogue still bring me right back to the magical feeling of playing it for the first time after waiting for all those years after Book II. As for the ending, I love it! I love the idea that it's up to the player to decide who is right and who is wrong. That when it's all said and done we're ready for a break - I say amen to Basilisk Games for breaking free from the cliche.
One final thing I hadn't thought of before: In my mind, Erubor has always seemed like the more likely true story - perhaps simply because that's what we're told for games 1-3. A big part of me felt like the reason we saw Malkur's face immediately after drinking the potion and immediate before starting our new life was because Crius Vindica wanted me to know what I was fighting. But what if Malkur was telling the truth? What if in reality we were a double agent, and the information we were worried about was not "What if Malkur finds out what I know about the Crux of Ages?" and instead "What if Crius Vindica finds out whose side I'm really on?" Just food for thought. 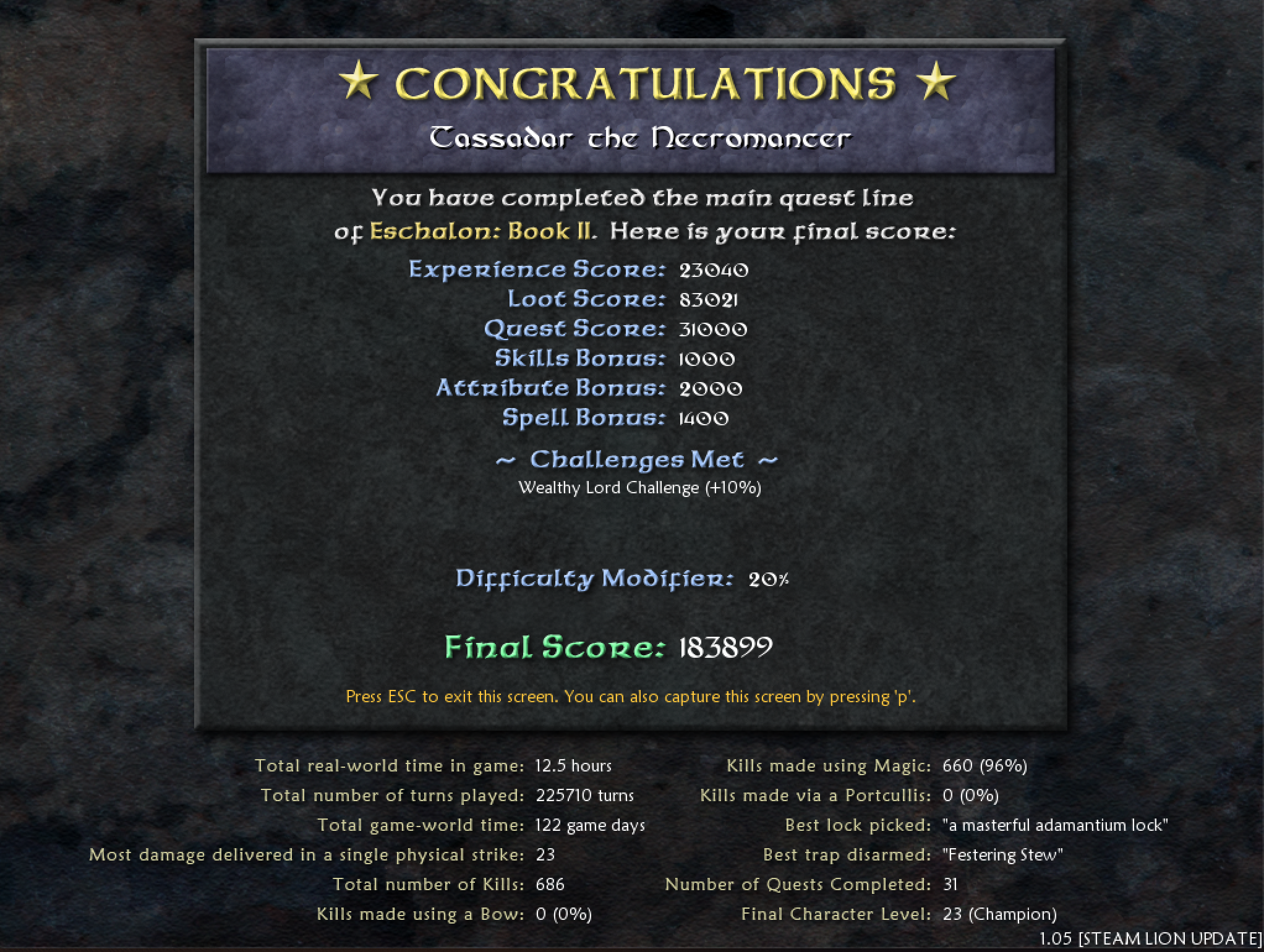 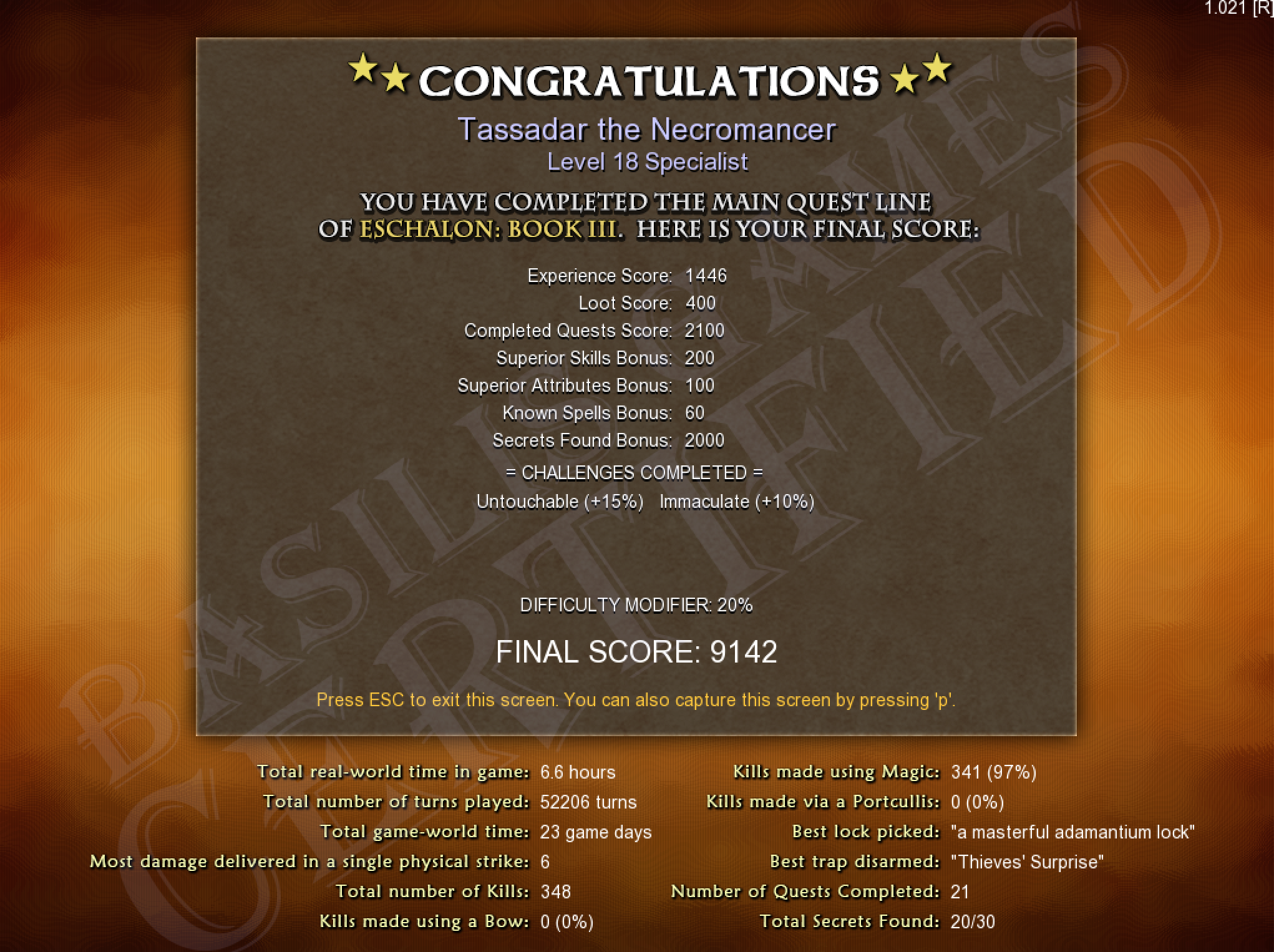 You know, that is an awesome challenge you took on! I too got homesick for Eschalon this winter and did a complete play-through of all three games, only my character was a ranger. The Divination expert sounds like a wonderful idea!
Top

I think that's one of the beauties of these games - Basilisk Games (i.e. Basilisk Wrangler) has created something that we can feel homesick for. Something that to me, feels like a classic, something I want to revisit every now and then. I think that a vast majority of recent games do not have that quality.
Check out my walkthroughs:
Character: here
Book I: here
Book II: here
Fathamurk: here
Book III: here

Have been thinking about playing through the series with your intriguing character. So, quick question is "Did you ever wield a weapon, use Unarmed Combat or use Elemental Magic?" The first guess is that you were totally pure, but it would be nice to know

In Book II I did all three of the above, haha. I ended up getting Elemental for Lock Melt, and a carried around the dagger that I started with just... 'cause? By even mid game it was pretty useless.

I think that it would have been possible with a pure, but I wanted the loot too badly.
Check out my walkthroughs:
Character: here
Book I: here
Book II: here
Fathamurk: here
Book III: here

Well Vroqren, you have totally earned my respect as a gamer. Man, how did you ever get through the games relying mainly on Divination?

You inspired me to try the same thing, but I gave up at the Southern Gate in Book I because it was just so darned painful. My spells only had about a 50% success rate and the amount of resting I had to do after every battle was ridiculous. Anyway, you should earn some sort of medal for persevering with that build. Hats off!
Top

I'm ashamed that it's been so long since you made this post and I hadn't seen it yet. But, maybe the problem is that I was too used to camping in the first place, hahaha.
Check out my walkthroughs:
Character: here
Book I: here
Book II: here
Fathamurk: here
Book III: here