Thaermore Revisited is a mod that extends the gameplay slightly for Eschalon: Book I with several new locations and is designed to be played with a new character. If you have not completed Eschalon: Book I at least once it is strongly recommended you do so before you install and use this mod.

You install and use this mod with the understanding that Basilisk Games and myself are not responsible for any problems you encounter, and that this mod is not supported by Basilisk Games. 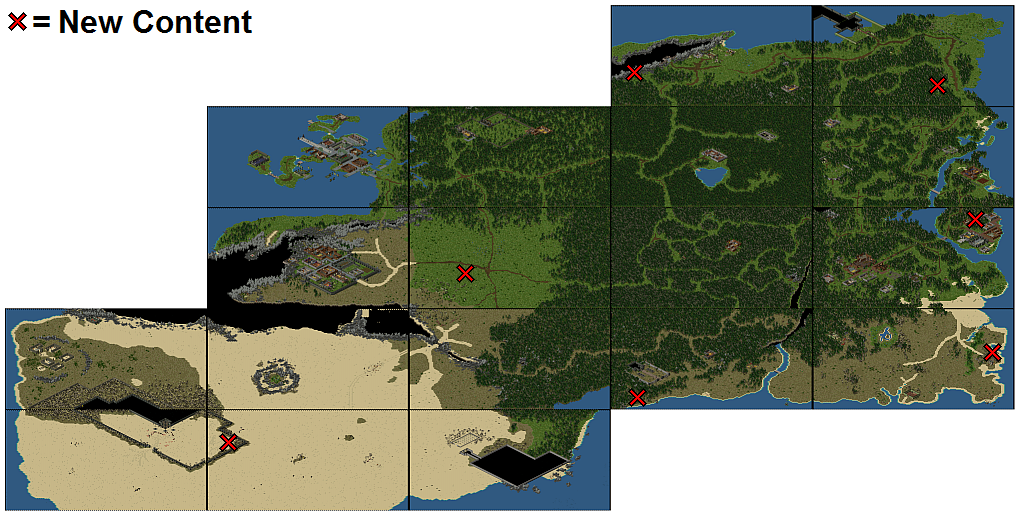 Sweet! Downloading now. I'm thrilled that there's some fanmade content getting out here now. :) May not have a chance to actually play around much for a bit, but I'll let you know what I think once I do.

Grrrr. File temporarily unavailable. Now I may have to actually do more work.
---

SpottedShroom wrote:Why not host the file as an attachment on this board instead of on Megaupload?

Too big. I know I could remove the image that shows the location of new content to reduce the size of the download, but I want to keep it in the folder.


SpottedShroom wrote:Have you thought about providing the content as savegame map files rather than global map files?

I thought about it after playing your mod but I decided not to. This mod is designed to be played with a new character, I don't want people creating a character and then exiting the game to mess about with their save game.
Top

JL, I would suggest adding the instructions for installing this mod (if there are any - I haven't pulled this down yet, and probably won't until Christmas break...) to the first post in this thread to "idiot-proof" the installation procedure for some of us.

Download comes with a text file that gives instructions on how to install.
Top

Jedi_Learner wrote:Download comes with a text file that gives instructions on how to install.

But no reason not to include that info here too, right?

(Unless it's too long a doc., in which case I'd understand why you don't reproduce its contents here...)
Or you could include a direct link to the text doc., I guess.
Top

I'm a little nervous about downloading this in case it crashes my original Book I from Basilisk games. Can it be uninstalled if there are problems?
Top

If you install this mod and want to return to the original content for whatever reason, all you need to do is uninstall Eschalon: Book I and reinstall the game. You should delete any saved games you made while using this mod. Advanced users can create a copy of the original "data" folder and store it somewhere for later use so they don't have to uninstall, but I left this out of the readme to avoid complications.
Top

It's those kind of concerns that led me to want to base mods on savegame map files rather than global ones. In the worst possible case, all it can do is mess up the save game slot you apply it to.

The most elegant solution would probably be to build an installer that would place the new map files into the game's data directory while making backups of the originals. Then when you uninstall it, it would restore the original files. The same principle would work for savegame map mods - let the user browse for a save slot, verify that the appropriate map files are or are not present, etc.

Maybe I'll look at contributing code like this to xolotl's editor. It would certainly be easier than the Diablo-style random dungeon map generator I keep wanting to write.
Top

I just played through the new content, and here are my thoughts:

For the storehouse in Aridell:
It seems like taking the storage key should be stealing. Is that intentional?
Why is the lock so high level? I know you want people to find and use the key, but it doesn't make sense
Why so many empty containers?

For the basement in the thug hideout on the Salted Coast:
Sound effect entering cellar - nice! Some flavor text about a bottle smashing or something might also be cool.

For the cave near Bordertown:
The rocks at the edge of the forest clearing where the cave entrance is look artificial

For the ruined temple:
The wall crumbling effect is nice!

For the goblin tower:
Did you just copy the map from the lower level to make the "background" for the second level? Is there a better way to do multi-level maps?
Top

SpottedShroom wrote:It seems like taking the storage key should be stealing. Is that intentional?

Intentional. The map editor doesn't touch dialogue, otherwise I would of had the player talk to Eleanor about using the storehouse for a price. I used the Storage Key because it doesn't drop in the game. It is scripted to open the locked door in Lilith's house though.

I wanted to convey how unused and empty the storehouse is. I also didn't want the player getting too much gold at the beginning of the game. Do you think four containers (32 spaces) is enough to make it worthwhile for a player to use the storehouse?


SpottedShroom wrote:Some flavor text about a bottle smashing or something might also be cool.

Originally I did have some flavour text, but I removed it because I felt I was giving away too much.


SpottedShroom wrote:The rocks at the edge of the forest clearing where the cave entrance is look artificial

The part in the red circle?


SpottedShroom wrote:Did you just copy the map from the lower level to make the "background" for the second level? Is there a better way to do multi-level maps?

I copied the map from the lower level to make sure the wall and trees were in place. I could of done it manually, but I felt it was easier doing it this way.

Overall SpottedShroom, what did you think of the mod? Would you like to see more? Did the new content feel out of place, or does it blend well with the original content? Do you think the new content is balanced, especially with what you find in the Barrier Range cave? Would you recommend this mod? I notice you haven't mentioned the camp southwest of Tangletree Ossuary or the building in Northeast Thaermore. What did you think of these two areas?

And thank you for the comments SpottedShroom, I appreciate it.

I didn't know the Storage Key was referenced in the game. I believe that there's nothing in the engine that would prevent you from creating new keys from scratch, though. All it cares about is the text name of the item in inventory.

Oh, I see - the storehouse is meant to be used by the player to store stuff! Sorry, I'm a bit slow on the uptake sometimes. I imagine it would be good for that, but I personally tend to use barrels near quick travel points when I need to stash stuff. Also, in theory taking your own items out of non-barrel containers is stealing - if you're unlucky, the guard might see you.

The rocks I was referring to are a bit farther northeast of that screenshot - I guess they might be from the original map, in fact.

The tower second level works really well, in my opinion. I'd love to see this technique applied to make something like a multi-level castle. The only real drawback is that since the scenery is copied from map to map, it makes some things not work right. If you kill a goblin that drops a bag of loot, say, you can't "see" it from the tower, etc.

I didn't remark on the other two new areas because nothing struck me about them in particular. No novel uses of the engine or anything that seemed out of place. I suppose that means they blended in the best to the existing content.

Overall, I thought it was interesting for being the first real new content anyone has developed, and well implemented. I'm personally more excited about larger, complex new areas, though, which are obviously more difficult to design. I also prefer strictly adding content rather than modifying what's already there, but to each his own.
Top

very good mod jedi ,u know if most users keep doing these fan made mods we can actually bring the game to life.
BTW i am currently working on a mod for book 1 i'll share it soon
P.s : excuse my bad English

Return to “Eschalon: Book I”